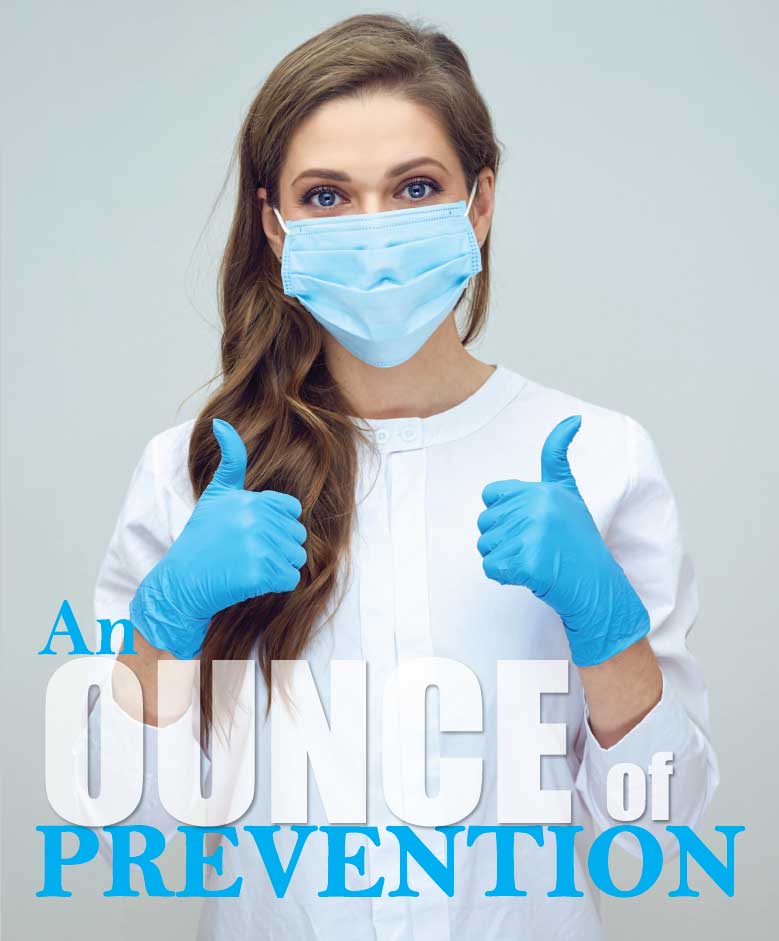 According to the Centers for Disease Control (CDC,) seven out of 10 U.S. deaths are caused by chronic disease, while roughly half of the country’s population has been diagnosed with a chronic illness, including heart disease, cancer, diabetes, AIDS, or other conditions classified by the medical community as preventable.

Statistics like these signal a need for greater emphasis on proven preventive approaches to health care. According to Healthy People, a federal program administered by the United States Department of Health and Human Services, routine cardiovascular exams alone save tens of thousands of adult lives each year… Preventive health screenings and primary care consultations have also been found to significantly increase life expectancy, particularly among the 30- to 49-year age group. -publichealth.org

The COVID-19 pandemic changed so many things about how Americans dealt with life, but preventive healthcare in particular was affected. What is the effect of delaying preventive screenings? It is hard to say.

We have gathered information about health screenings, when they should be undertaken, and asked some leading health care providers in our area to join the conversation. 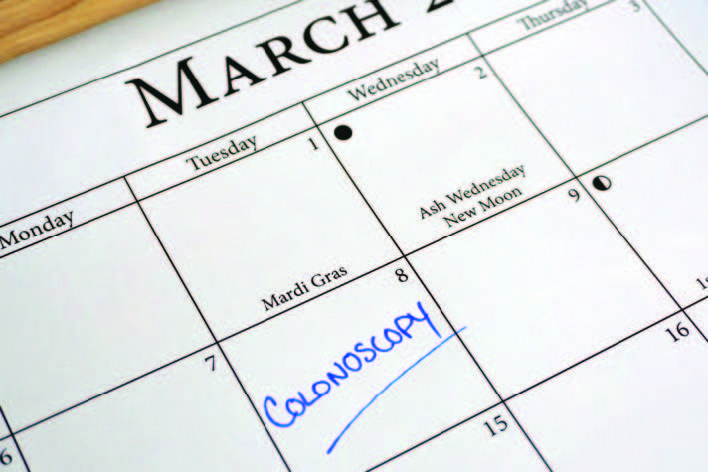 Colorectal cancer is the second-leading cause of cancer deaths in the U.S. among men and women combined, and an estimated 147,950 adults were expected to be diagnosed in 2020.

The American Cancer Society cited the implications of COVID-19 on colorectal cancer screenings:

• 18,000 missed or delayed diagnoses of colorectal cancer from mid-March through early June

• 4,500+ excess deaths from colorectal cancer over the next decade

As the effects of COVID begin to wane, and people return to some degree of normalcy, the focus on preventive health screenings is rising.

Lindsay Rice, CEO of Alabama Colon & Gastro P.C. sat down with me to discuss two major factors about colorectal cancer screenings. Armed with information from the Alabama Gastroenterological Society, the American Cancer Society and Journal of the American Medical Association’s Network Open (open access medical research and commentary,) Rice explained the importance of colonoscopy and what it means in terms of prevention, earlier diagnosis, and the successful treatment of colorectal cancer. She also described a significant change in the age recommendation for colonoscopy.

Because preventive screenings have been delayed during the pandemic, providers are seeing an increase in cases. “Screening is more important than ever,” said Rice.

Colonoscopy is the Gold Standard for Colorectal Cancer Screening

Noting the differences in the types of tests that are considered preventative screening, Rice emphasized that colonoscopy is considered the gold standard. “Colonoscopy is the only test that can prevent colon cancer, plus it can diagnose colon cancer, something other testing cannot accurately do,” said Rice. “It is the only test that views the entire colon and rectum for abnormalities, identifying and removing precancerous polyps, and can be a secondary source for diagnosing other problems.” With improved test preparation, readying for colonoscopy is easier than ever.

At-home tests, have recently risen in popularity, specifically a test called Cologuard. Rice said, “It’s important for patients to understand that most insurance companies will cover preventive colon cancer screenings. But if an at-home test is used and has abnormal results, then a follow up diagnostic colonoscopy is required, which may not be covered by insurance.” Patients may lose their colon cancer screening benefit by using an at-home screening test – meaning that cost of the needed follow-up colonoscopy would likely be an out-of-pocket expense.

Expenses aside, a letter to primary care providers from the Alabama Gastroenterological Society stated that in follow-up colonoscopies of a positive Cologuard test, only 4% of patients had colorectal cancer, and 45% were normal, causing undue anxiety for many patients. In fact, the letter urged providers to discontinue the practice of sending unsolicited colorectal cancer screening kits to their patients and instead encourage them to contact their physician for recommendations.

Recommended Age for Colonoscopy Changed from 50 to 45 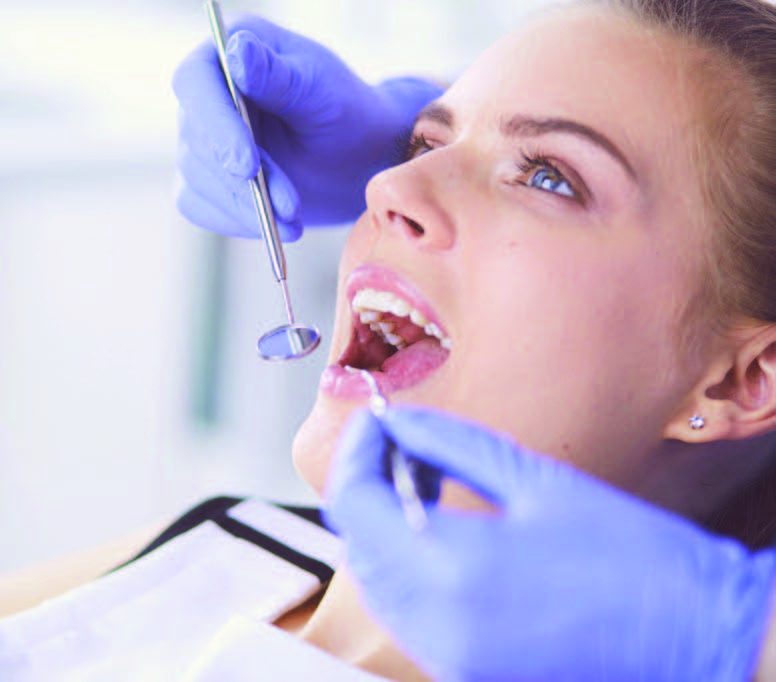 explained, “The USPSTF guidelines directly inform insurance coverage with regard to screening. So 98% of insurance providers will pay for colonoscopy at age 45.” Rice added, “We are seeing younger people diagnosed with colon cancer. Thisrecommendation is significant.”

An article entitled “Oral Health: A Window to Your Overall Health,” from the Mayo Clinic’s website poses a question:

“What’s the connection between oral health and overall health?”

Like other areas of the body, your mouth teems with bacteria — mostly harmless. But your mouth is the entry point to your digestive and respiratory tracts, and some of these bacteria can cause disease. 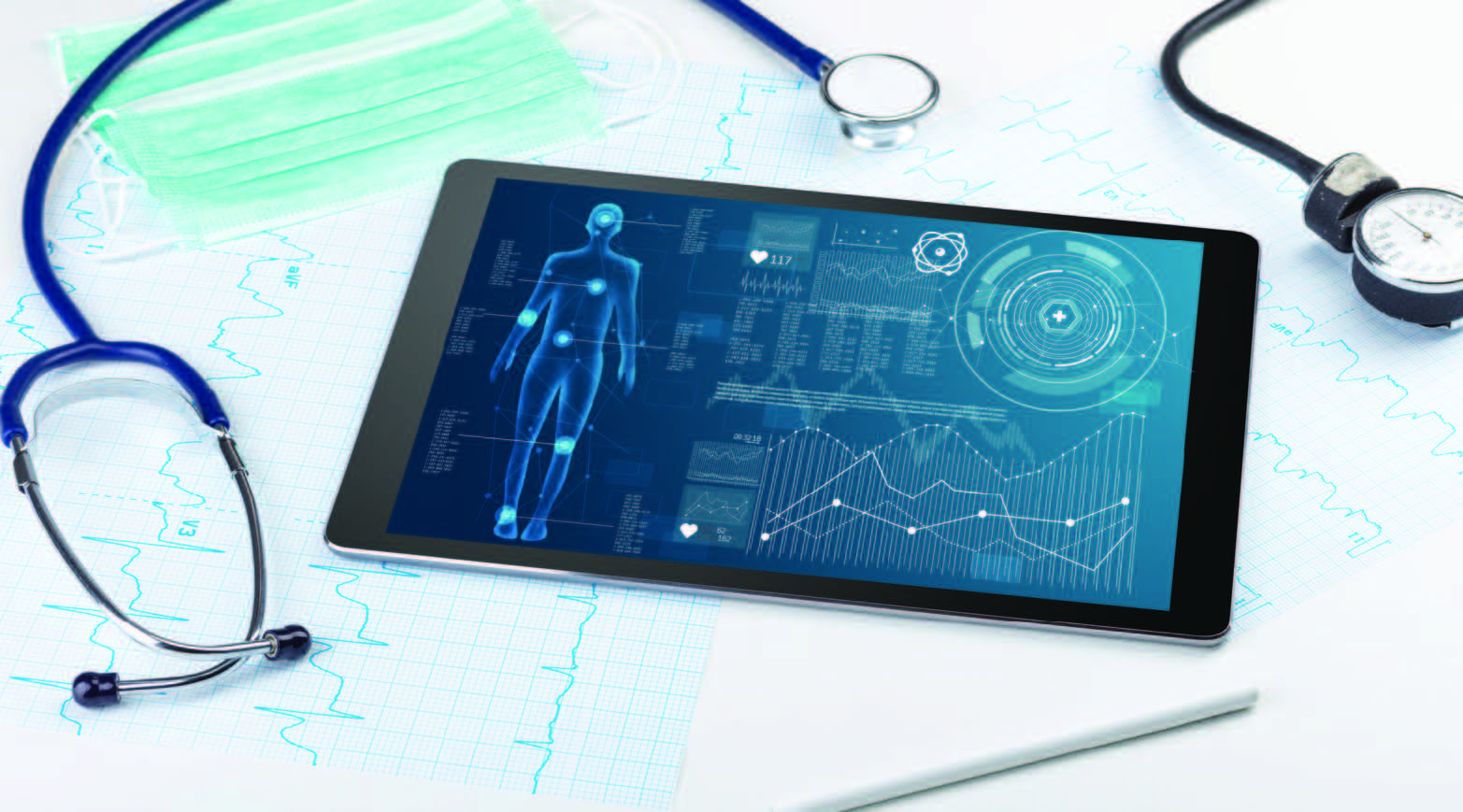 Normally the body’s natural defenses and good oral health care, such as daily brushing and flossing, keep bacteria under control. However, without proper oral hygiene, bacteria can reach levels that might lead to oral infections, such as tooth decay and gum disease.

While we consider that poor oral health can affect our teeth and gums, it can have other overall health consequences. What conditions can be linked to oral health? Your oral health might contribute to various diseases and conditions, including:

• Endocarditis. This infection of the inner lining of your heart chambers or valves (endocardium) typically occurs when bacteria or other germs from another part of your body, such as your mouth, spread through your bloodstream and attach to certain areas in your heart.

• Cardiovascular disease. Although the connection is not fully understood, some research suggests that heart disease, clogged arteries and stroke might be linked to the inflammation and infections that oral bacteria can cause.

• Pregnancy and birth complications. Periodontitis has been linked to premature birth and low birth weight.

• Pneumonia. Certain bacteria in your mouth can be pulled into your lungs, causing pneumonia and other respiratory diseases.”

What does it mean to maintain proper oral health and hygiene? We know that brushing twice per day with fluoride toothpaste, flossing daily, and seeing your dentist for regular check-ups and cleanings are vital to oral health. However, dentists use diagnostic aids to enhance the screening process and derive treatment solutions.

Dr. Lisa Bruce and Dr. Sonya Wintzell of Dental Professionals on Whitesburg describe some tools they employ in the practice of prevention.

The prevalence of oral cancer is increasing and has been linked to the papilloma virus, alcohol consumption, smoking and smokeless tobacco. Cancer can also be a consequence of repeated trauma to the oral mucosa as seen with ill-fitting appliances. We take this very seriously and screen all patients for oral cancers. Screening tools that use three wavelength optical illumination help us identify otherwise invisible early cancer. Our ultimate goal is prevention, protection and early detection and treatment of this disease.

Our team can assist in the prevention and progression of gum disease. We utilize the latest techniques for routine maintenance and complex treatment of gum problems. Whether the treatment requires deep cleanings, local antibiotic placement or laser treatment, we are prepared to customize a program to provide for a wide range of dental needs. We also partner with a specialist in our area for the most comprehensive approach possible if surgical intervention is needed. 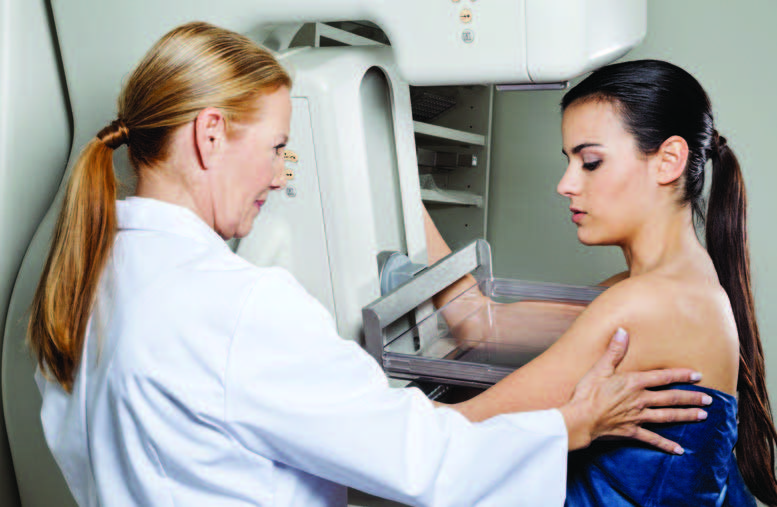 Mammography it is the definitive preventive screening for breast cancer, and has come a long way since its beginnings.

The Evolution of Mammography

In the 1960s, radiologists performed mammography exams using general purpose X-ray tubes and no compression. They captured the imaging onto direct-exposure films, similar to chest X-rays. These images were low in contrast and the area of tissue close to the chest wall appeared “white” due to underexposure.

At the turn of the century, breast imaging experienced another significant advancement with the introduction of digital mammography. While digital mammography is performed the same way as analog from the patient perspective, the machine uses signals to produce images that can be read on computers rather than X-ray film.

Today, most radiology practices in the U.S. use digital mammography because it provides better quality images with improved tissue contrast. Studies have shown that digital mammography is particularly better for dense breasts, as well as for younger patients, who tend to have denser breast tissue than older patients. Digital mammography also has the added benefit of lower radiation dose compared to traditional analog mammography.

American women hear conflicting information when it comes to both the age to begin having mammograms and the frequency. A study by breastsurgeons.org stated, “Despite differences regarding the preferred age for initiating mammographic screening, all guidelines advocate in favor of access to screening mammography beginning at age 40 for women who are asymptomatic and have average risk in the U.S.”

Prostate cancer is the most common cancer among men (after skin cancer.) The American Cancer Society’s estimates for prostate cancer in the United States for 2021 are:

• About 1 man in 8 will be diagnosed with prostate cancer during his lifetime.

Prostate cancer is more likely to develop in older men and in non-Hispanic Black men. About 6 cases in 10 are diagnosed in men who are 65 or older, and it is rare in men under 40. The average age of men at diagnosis is about 66.

Prostate cancer can often be found early by testing in one of two ways:

Prostate-Specific Antigen: Physicians perform testing for prostate-specific antigen (PSA) levels in a man’s blood. The levels of PSA in the blood can be higher in men who have prostate cancer. The PSA level may also be elevated in other conditions that affect the prostate. Because many factors can affect PSA levels, a doctor is the best person to interpret PSA test results.

Physical Exam: Physicians may perform a physical exam of the prostate gland.

If prostate cancer is found as a result of screening, it will probably be at an earlier, more treatable stage than if no screening were done.

The American Cancer Society recommends men who are at average begin discussions about prostate cancer screenings with their physician at age 50. 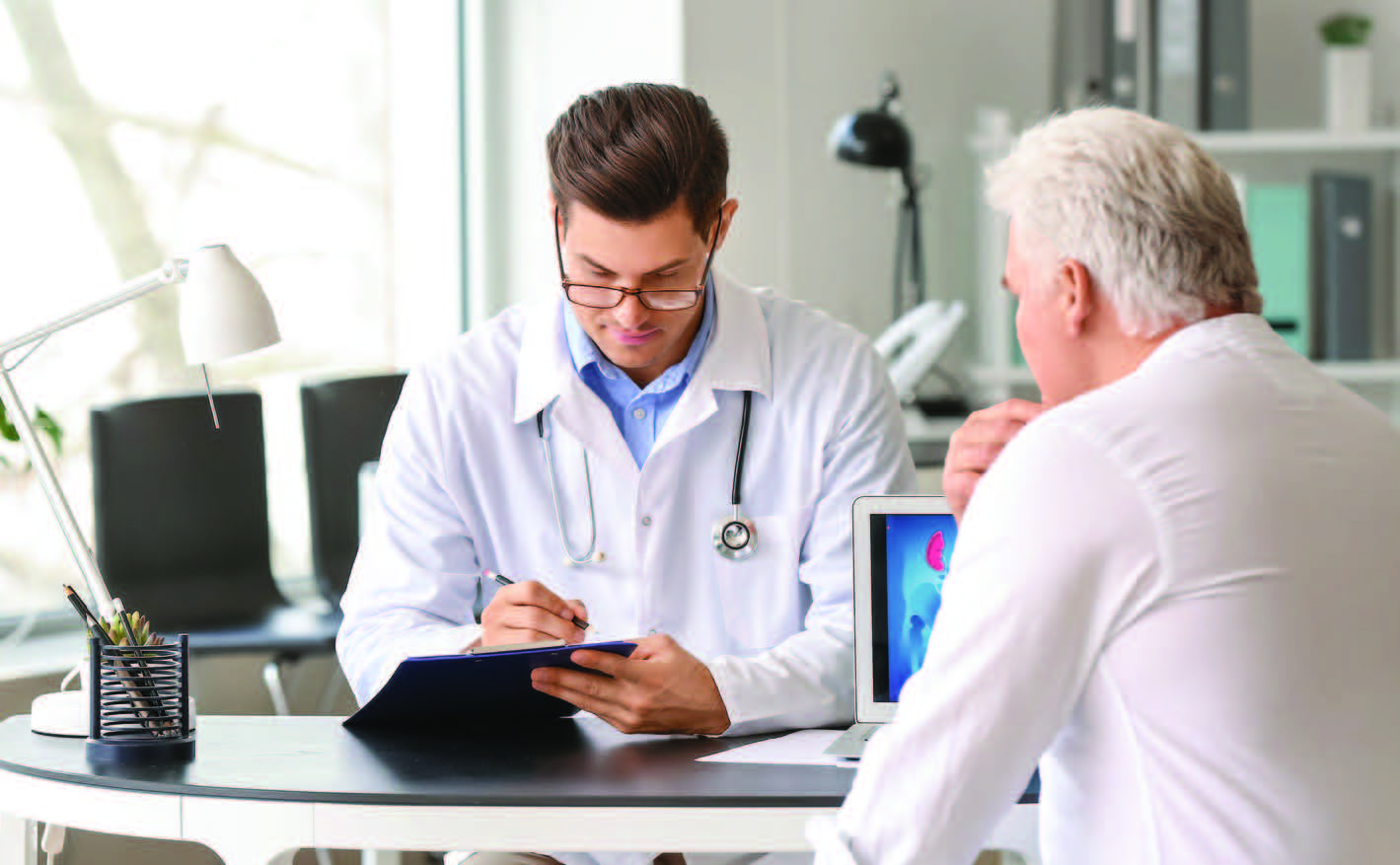 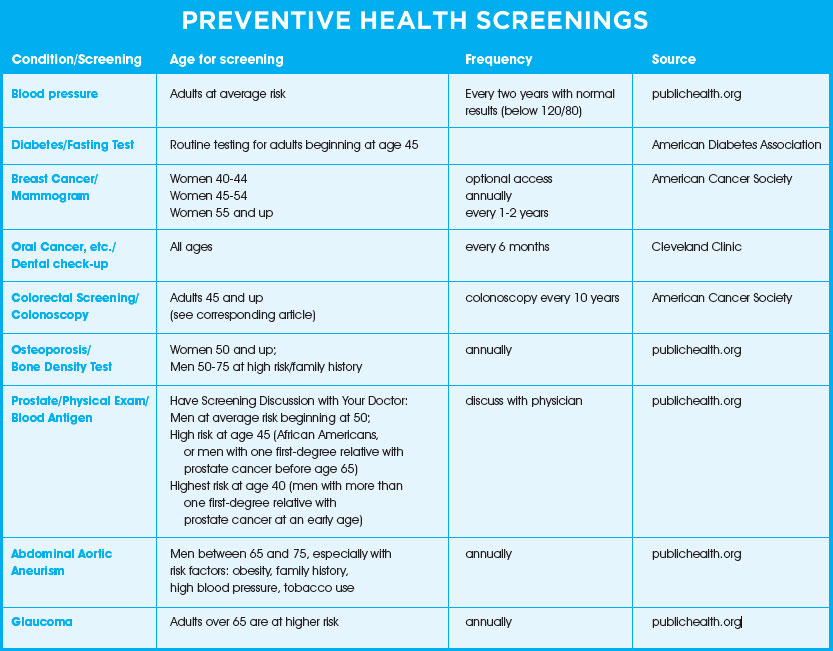