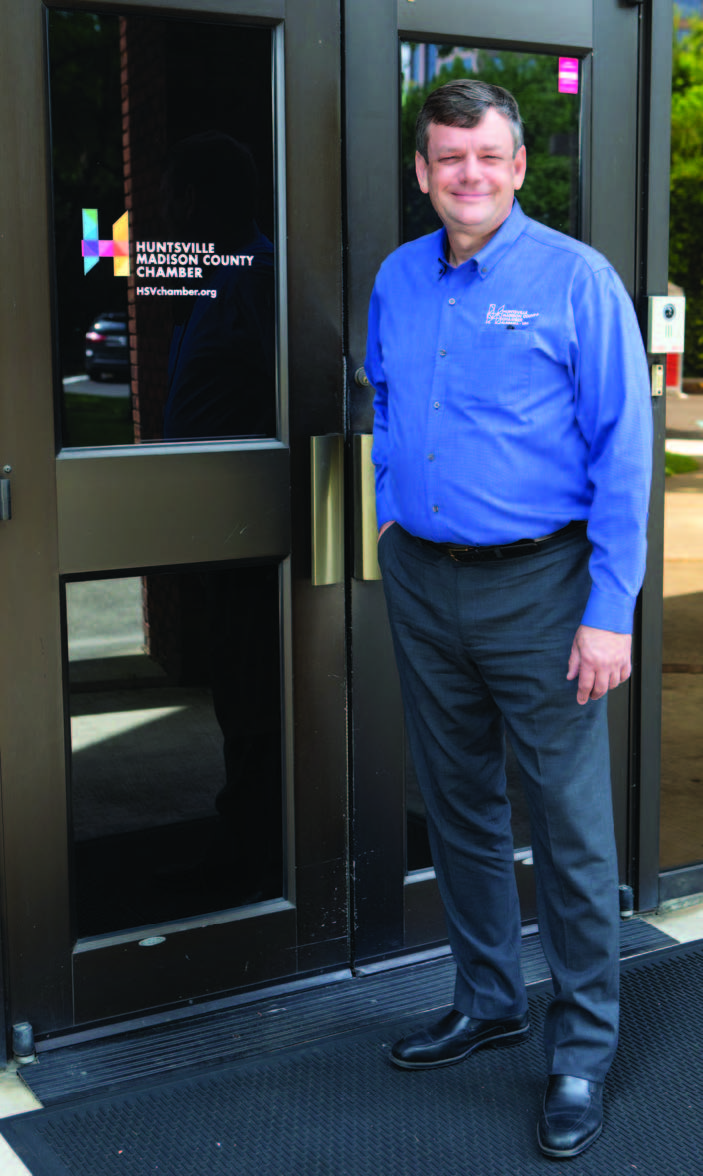 Chip Cherry is president and CEO of the Huntsville/Madison County Chamber of Commerce – positioning him as the liaison between businesses, organizations and the community at large. During his tenure, the city of Huntsville has experienced continuous growth with no end in sight. Cherry has been instrumental in his role with the chamber in developing and implementing ideas for economic development over the last decade.

In July 2017, the Huntsville/Madison Chamber of Commerce was named Chamber of the Year by the Association of Chamber of Commerce Executives which is made up of more than 7,500 chambers around the world. Site Selection Magazine also awarded the chamber with the Mac Conway Award for Excellence in Economic Development in May of 2019. While both awards showcase the Chamber’s organizational strength and its impact on the community, Cherry is quick to point out that the success of the area is largely due to the mindset of unity shared by its leadership throughout the community. “The way the community and region grew up, there was a foundation laid a long time ago for regional cooperation,” Cherry explained. “A lot of other places that I’ve worked, you have a hard time convincing people in various different jurisdictions that it’s in their best interest to work together. Here, that premise was already established.”

Before his appointment by the Chamber’s search committee in 2011, Cherry accumulated almost 30 years of experience with chambers in North Carolina, Virginia and Macon, Ga. He stated that what sets Huntsville apart from his other chamber experiences is the city leadership’s ability to highlight possibilities where others might see barriers. “We have the largest concentration of engineers in the country, and it shows. Other communities, when faced with a challenge, the conversation starts with ‘we can’t do this because…’ and there’s a whole litany of reasons why you can’t do it. Here, the conversation identifies how to solve the challenge with option A or option B or a combination of different options. It’s subtle difference than is lost on some people but it is a huge differentiator. Instead of bleeding out energy dealing with why we can’t do it, you are basically creating energy based around opportunities and options.”

Taking into account more than just unemployment and median income, Cherry outlined his strategy for job growth. “We wanted to make the market healthier. And one problem we had was a lack of attainable jobs to propel residents from entry level to the middle level of the job market. When Toyota Mazda would announce a 200 – 400-person expansion, 10,000 people would apply for those jobs even though we don’t have 10,000 people that are looking for work. The reason is because we have a significant amount of people who are underemployed but not unemployed. We were looking at that issue wondering how we could modify our approach and solve that problem and decided that advanced manufacturing would be one of the core pieces in the solution. Before, we had been focused on aerospace, defense, life sciences and other higher end industries but we didn’t have many jobs that make up the middle part of the market between entry level and high-end jobs. We’ve now added 28,000 jobs in that market with predictions of at least 7,000 more over the next few years.”

Cherry’s process has resulted in a livelier and more diverse Huntsville. “We’re already starting to see the benefits of the investments that have been made. Nearly 10 years ago when I first arrived, I attended a presentation that highlighted a gap in the ability to recruit talented people out of college and grad school, ages 22-28, to Huntsville. The recent investments in things like Downtown Huntsville, the Trash Pandas and the upcoming amphitheater have created a stronger sense of place. Now it’s a much easier sell and they see that some of their traditional perceptions of the south aren’t true because of the nature of what we do here. The most recent numbers I saw show that 47% of people that live in Huntsville are not from the state of Alabama which helps makes us a more dynamic community. It’s very exciting for me that we are looking over that horizon and seeing some change in that regard.”

Even though he is approaching 40 years of working with chambers around the country, he is still rewarded in his work by the same thing that drew him in as a 22-year-old intern – the opportunities for creative problem solving. Cherry’s role in the chamber allows him to see how different pieces of the puzzle are scattered throughout the community and identify how to put the pieces together to tackle a problem or take advantage of an opportunity. “Taking a very complex, challenging problem, breaking it down and finding the right partners to advance through the problem is very rewarding to me. And I love being able to do that with the brightest minds in both Huntsville and Madison.”