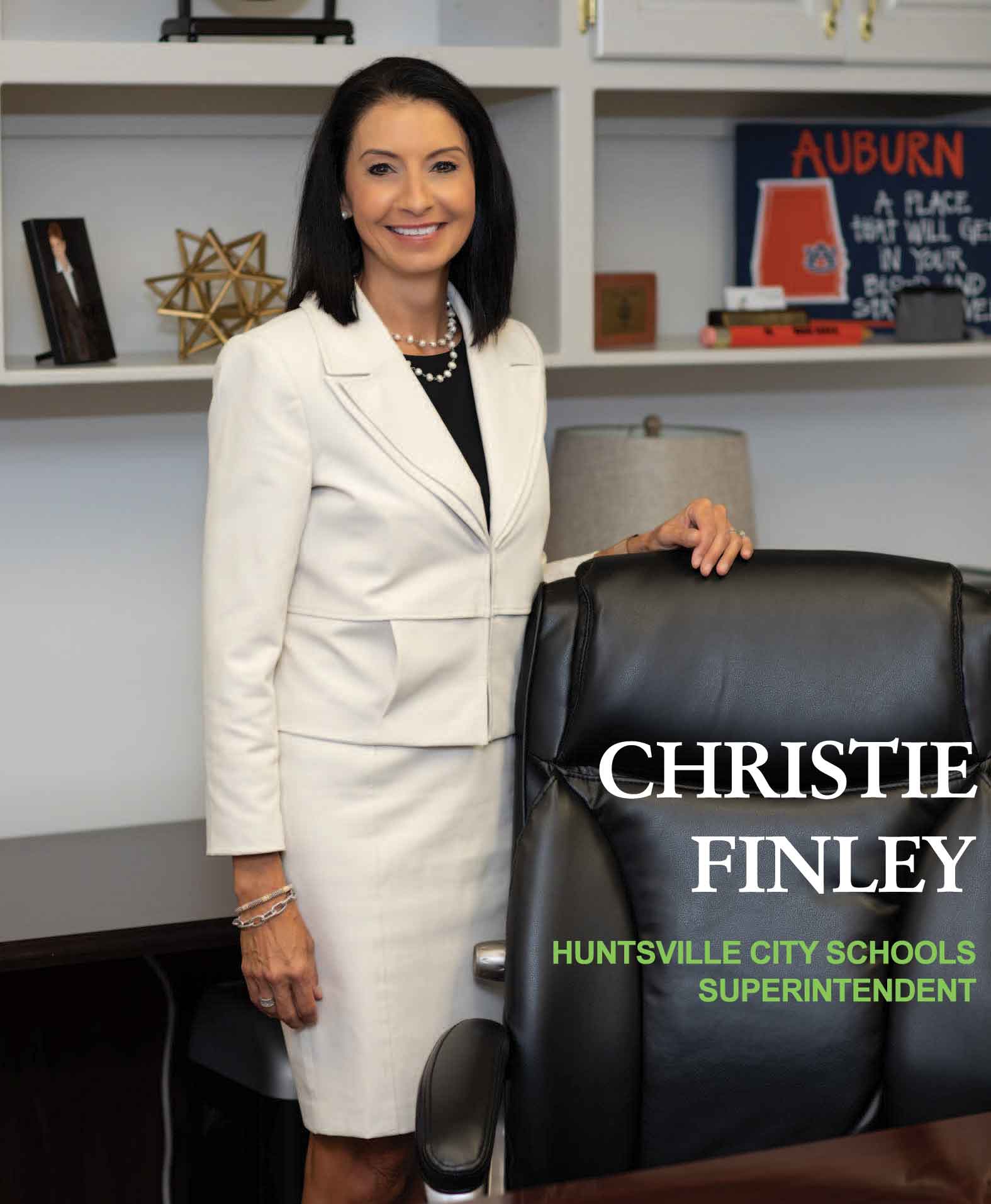 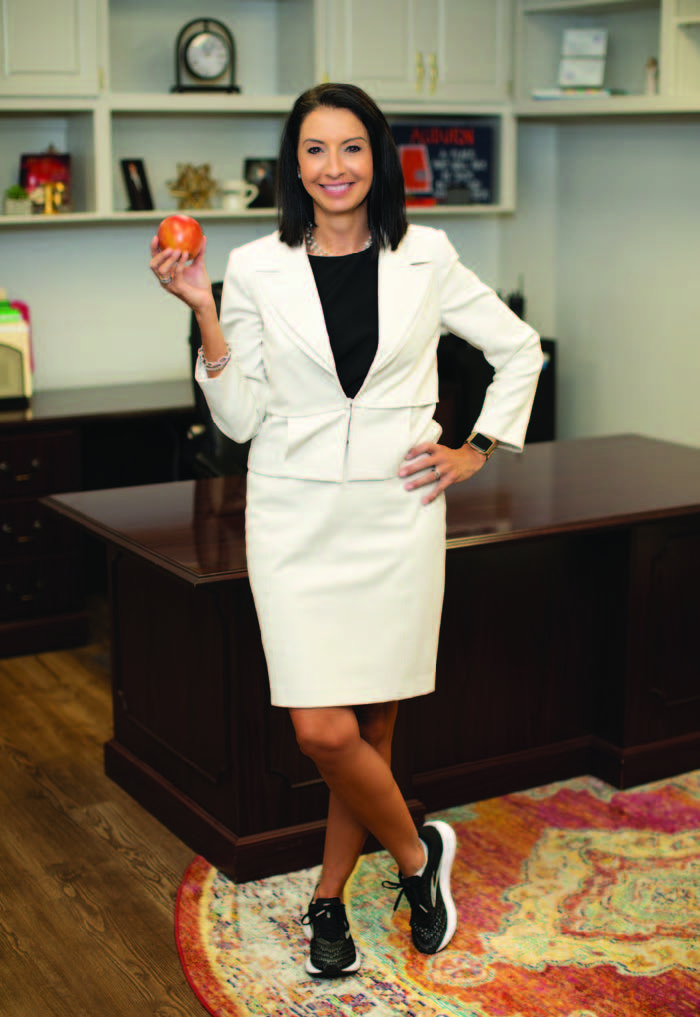 When Huntsville City Schools Board of Education selected Christie Finley as its new leader in August 2018, she inherited a robust school district. However, it was initially fraught with challenges of a fiscal variety.

Fast forward 19 months later, neither Finley, the school board, nor her city’s constituents could truly anticipate how crucial her role as superintendent would be when faced with an unprecedented crisis of global proportions, an ongoing situation that continues to play out as the 2021-2022 school year begins.

With nearly 30 years’ proven academic excellence in both the classroom and as an administrator, Finley is a third-generation educator. Her career has encompassed the three school districts of Madison County, Alabama: Huntsville City, Madison City, and Madison County.

Finley grew up in Madison and earned her Bachelor of Science in Education from Auburn University, followed by a Master of Education in School Counseling from Alabama A&M University, then an Educational Leadership Degree from the University of South Alabama.

Before her selection as Superintendent of Huntsville City Schools, Finley served in a variety of progressive roles, including Deputy Superintendent of Strategy and Innovation, Director of Secondary Programs, school principal and classroom teacher.

Among many accolades in her noteworthy career as an educator and administrator, Finley received the honorable distinction of being named one of nine finalists for the 2021 Alabama Superintendent of the Year. She was also one of the area’s five businesswomen nominated by the WEDC Foundation for making a significant impact in the Huntsville community while overcoming considerable obstacles as they strive for success in their respective fields.

Finley was strongly influenced by her mother’s approach to education. “It was just something I would watch my mother do. I would go with her to work; we’d get to school at 6:30 in the morning and I would watch her fill the chalkboard up with arithmetic,” she said. “As a second-grade teacher, she was teaching 3-digit subtraction and regrouping. That’s typically something that’s introduced toward the end of second grade and even a little bit in the 3rd grade back in the day. I’d say, ‘That sure is a lot of problems on the board.’ And she would reply, ‘I want my students to be ready now, and in third grade, they’re already moving into multiplication.’”

“That’s something that already resonated with me, that you don’t have to just look at the average, or do the average or the standard, but extend those standards so that all students have that opportunity.” said Finley.

COVID-19 may have upended the 2019-2020 school year, but the academic focus and needs of the students and educators were never compromised. “Quite honestly, the landscape may have changed in terms of how we ‘do’ education, but at the at the end of the day, the focus has still been the same since I started teaching in 1991,” said Finley. “And that’s making sure that whatever decision we make, it’s in the best in the interest of our students and in the best interest of our teachers, so that all students have opportunities to achieve at high levels.”

During the pandemic, Finley and her team were able to find opportunities to reframe education. “Although the pandemic was and still is a health concern, it really made us rethink how we teach; how instruction is provided,” she explained. “If we look at the grand scheme of things that came out of this, it’s how we really individualized instruction for our students. It made us take a deeper dive in how we deliver that instruction to all students and that’s a positive thing. It also reminds us that we must continuously change.”

Selected as Superintendent in a time for which many can now nostalgically refer to as the kinder, gentler time before COVID, Finley believes that Huntsville City Schools were ahead of the curve with regards to preparedness. Not only for the pandemic, but for the future work force.

“Whether it be because of the pandemic, you can look at workforce development and the needs of our community,” said Finley. “Because we see now there’s a high demand and a short supply of workers.” The next step beyond ensuring students’ safety is to prepare them to transition right into the work force after graduation.

Huntsville City Schools was ahead of the game because in 2010, they went to 1-to-1 school district for grades 3-12. The lower grades had iPads that were available to students. For more than ten years, technology was part of the daily instruction landscape. “Technology is not the instructional delivery piece, it is a tool for instruction,” said Finley. “That teacher component is the most critical for the student – making sure they have that highly effective teacher that drives that instructional piece using the tools in their toolkit, such as technology.”

Although devices were available during the pandemic, dedicated connectivity and WiFi for all students might not have been. To that end, Huntsville City Schools deployed sixty-five WiFi equipped school buses into the Huntsville neighborhoods. Huntsville Utilities and ADTRAN stepped in by providing all Huntsville City schools perimeters with WiFi access so that parents and students could have WiFi access outside of the campuses. Additionally, the State of Alabama initiated the Alabama Bandwidth Connectivity program to help families that needed WiFi connectivity to complete their schoolwork.

“We are a team here,” said Finley. “At the end of the day we know that the single most critical factor for a child to be successful is a highly effective teacher and a support system in every school building.”