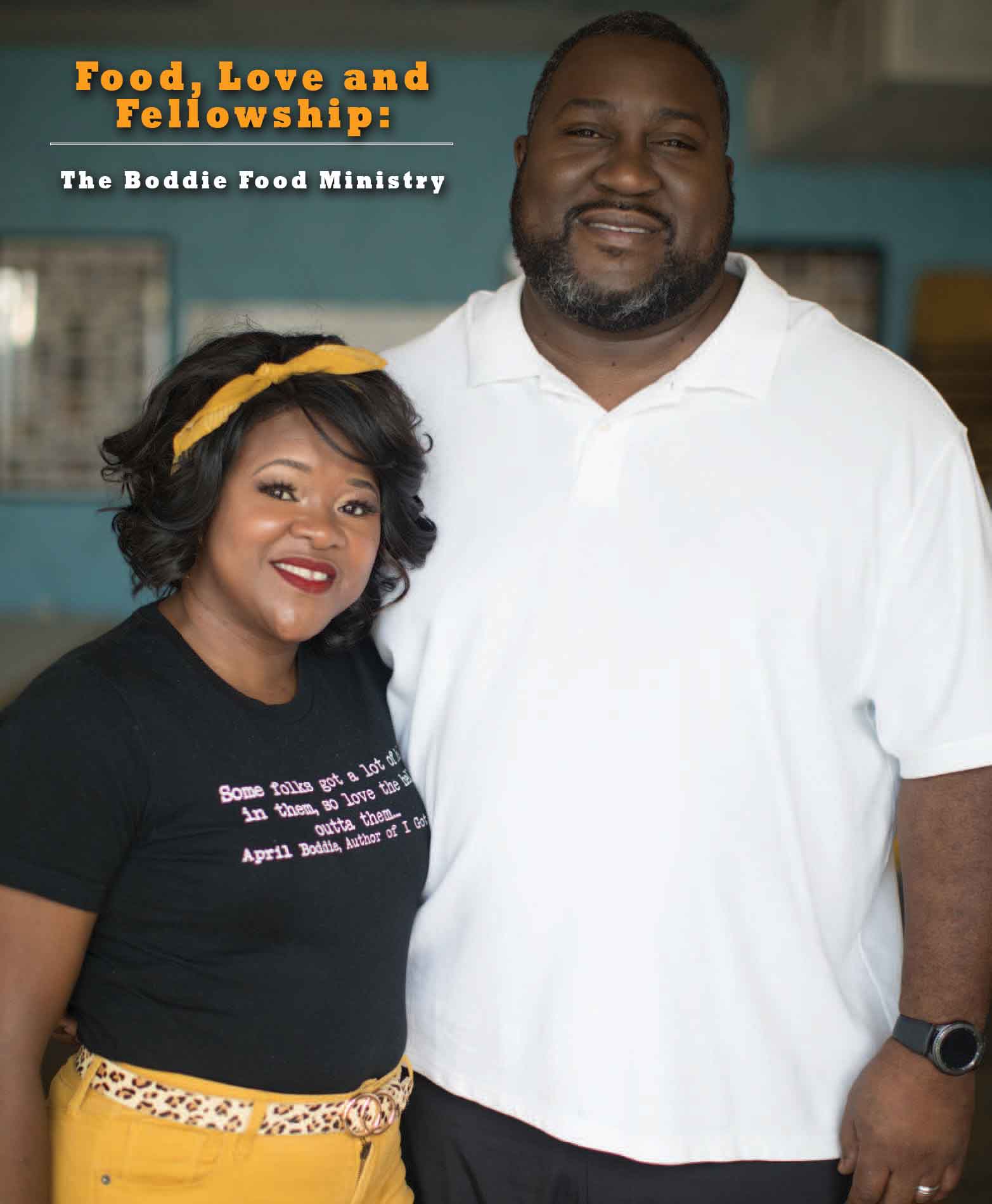 A pandemic will bring out the best or the worst in a community. Many people have lost their livelihood, along with the roofs over their heads and adequate food on their tables. Crisis will also illuminate where needs are the most emergent, calling forth those to serve.

It has been said that “Food is Love.” In the House of Boddie, truer words could never be spoken. For April and Chad Boddie, to prepare food and to feed others is to follow God’s will.

For the Boddies, their mission reaches far beyond feeding the hungry; they also bring compassion and dignity to the table. April makes it a point to treat everyone with courtesy and respect, getting to know everyone, generating an aura of love and kindness.

There are the homeless and the struggling, those who are often treated as invisible. Regardless of how they got in their situation and what their lives were before their circumstances changed –their stories are as varied as human thumbprints – they are not unseen in the eyes of April Boddie.

For the Huntsville native, her mission to serve was reinforced through her work. “Fifteen years ago, I got a job at the Inner-City Church of Christ,” said April. “My role was assistant life-skills counselor. I got the opportunity to work with homeless people, at-risk teens, single mamas, and I just knew that I loved the aspect of serving and I love the aspect of food.”

The Boddies have been together for 16 years and many refer to them as Uncle Chad and Auntie. “Just because we have that type of vibe and a type a family where everybody is always welcome at our home,” said April. “Wherever we are, we create a space where there is a chair for everyone and enough love to go around. We believe in doing everything with love, so everyone feels love.”

“When we got married, that’s when the food ministry was born,” said April. When the Inner-City Church of Christ decided to partner with the Salvation Army with a “Feed your Neighbor” cookout, they sought out the Boddies. It takes a special talent for preparing meats for the masses and Chad has a reputation of being able to work magic with all types of meats. “Chad is my always go-to guy,” said April. “I’m the one with the culinary arts degree, but he does all the heavy cooking for stuff like that.”

Although he’s a plumber by trade, Chad is the Director of Facilities for Madison at the Range, an assisted living facility. Most people never get to see him. After going in to work to check on things around 5 or 6 a.m., Chad heads to the Inner-City Church of Christ to prepare the food, long before people start arriving.

Despite having a heart and soul driving the food ministry, there is always a need for continued financial support. “We could not have made any of the cooking possible without the numerous donations from Churches of Christ and local companies,” said April. Pastor Timmy Smith at the Inner-City Church of Christ also provides a kitchen, as well as a location in which to serve.

The greatest hurdle in the face of COVID-19 is that of perception. “The biggest challenge to me is people seeing only certain jobs as an essential worker’s job,” said April. “We are essential workers and that is why we’re out here still working.” Everyone wears masks and follows the protocols that Governor Kay Ivey has set out for the citizens of Alabama. But, without a food ministry like the Boddies provide, many in the community would be struggling with an even greater problem: hunger.

Along with serving up heaping platefuls of kindness, food, and compassion, April Boddie has also imparted her wisdom and recipes to teens and young adults over the years. After a few suggestions and the realization that she will not be around forever, April decided to create her very own “guide to life” in the form of a paperback.

Her self-published book, “I Got 5 On It: Beating Around the Bush is for Landscapers.” is filled with practical wisdom, quotes, and of course, recipes. It is often taken for granted that everyone leaves the nest fully equipped with skills needed for the adult world. Unfortunately, that is not always the case. Boddie’s experience as a life-skills counselor tuned her focus to some of those basic skills that might be lacking in a teen or young adult’s life.

“It is my hope that “I Got 5 On It” will be to this generation the same thing that $5 was to me in my youth,” said April. “It was a little bit of ‘change’ that went a heck of a long way. The value of money has changed, but I pray my advice will be just as valuable as $5 was to me back then.”

“I want to show every child who grew up like I grew up that you can do something to put a ripple in the ocean of change,” said April.