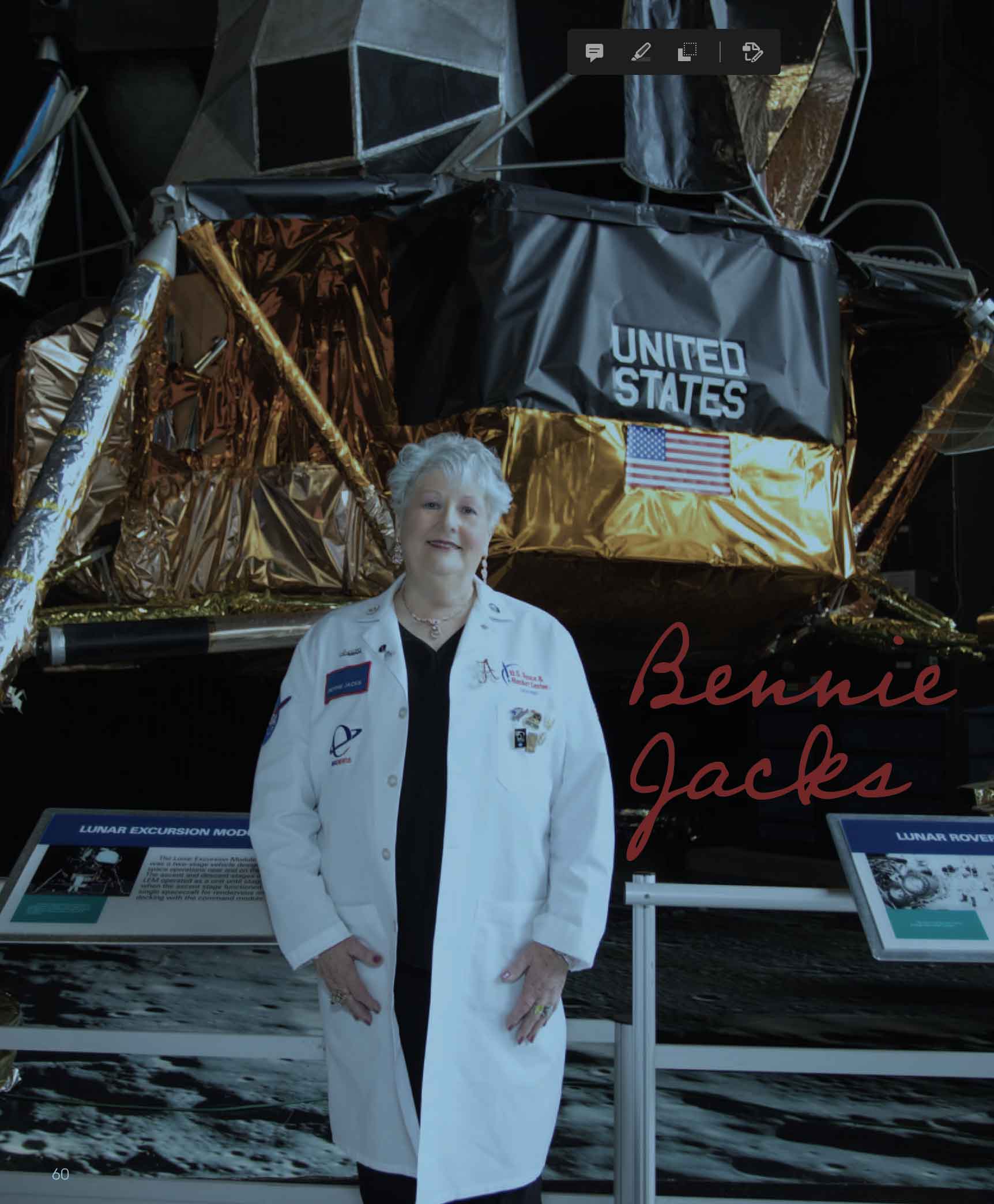 A native of North Alabama, Bennie Jacks earned numerous honors and awards during her long career at NASA’s Marshall Space Flight Center, including the coveted Silver Snoopy award, presented by an astronaut to recognize outstanding performance and contributions to flight safety and mission success.

EVENT: Have you lived in Huntsville all your life?

BJ: Yes, I am a native of Madison County. I grew up on a farm with three sisters and two brothers in Gurley. I graduated in 1966 from Gurley High School and married my high school sweetheart, Paul Jacks. We dated in high school and were married for 42 years until he passed away in 2008. He was also a native of Madison County and served 30 plus years with the Huntsville Police Department. We raised a son and have two beautiful granddaughters who live in Tuscaloosa. I am truly blessed to have lived, worked, played and raised my family in “The Rocket City” all my life!

EVENT: How did you get started working for NASA?

BJ: As students in high school, we took the Civil Service Exam and if you passed the test, you had the opportunity to work for NASA or the Army on Redstone Arsenal. Upon graduation, I chose to work for NASA. This was when Dr. von Braun was the Marshall Space Flight Center Director. I received on-the-job training and served in various clerical and administrative positions until 1985, when I entered the Professional Intern Program.

EVENT: You worked for NASA for a long time!

BJ: I held many different positions over the years until I retired as a GS-13 Business Management Analyst in the Safety and Mission Assurance Directorate in 2010 – a 45-year career! I am ever so thankful for my career at NASA. I worked with so many wonderful, intelligent, diverse people – men and women who put men on the moon.

EVENT: What have you done after retirement from NASA?

BJ: I spend my free time with my family while working as a volunteer at the U.S. Space & Rocket Center, the Madison County Convention & Visitors Bureau as a visitor information assistant, and volunteering and fundraising for other organizations. I’m also involved with my church and other community-related special events.

EVENT: Tell us more about your volunteer position at the U.S. Space & Rocket Center?

BJ: I currently serve as the U. S. Space & Rocket Center Volunteer & Community Outreach Coordinator and a member of the dynamic NASA/Military Emeritus Docent Team at the USSRC. I helped establish this program in 2014. We currently have over 164 NASA retirees, contractors, and military personnel on board with us in the USSRC Emeritus (NASA/Military) Docent Program. As the community volunteer coordinator, I recruit and assist with various community and USSRC center-wide duties, activities and special events.

EVENT: How does one become a volunteer with this program?

BJ: Each volunteer must complete a volunteer/emeritus application form, undergo a background investigation and attend special orientation classes. They are issued a volunteer badge, lab coat, and a shirt or military jacket. They must also attend training classes provided by the USSRC educational team. Volunteer duties, responsibilities, and activities are assigned per the individual skill set and/or special interests.

EVENT: What other organizations are important to you?

BJ: As a breast cancer survivor, I volunteer for cancer-related associations such as the Russel Hill Foundation, the American Cancer Society Relay for Life Event Leadership Planning Committee, and cancer-related special events and activities such as October Breast Cancer Awareness Month, Relay for Life, and the Huntsville Hospital Foundation Liz Hurley Ribbon Run and Luminary Sales. 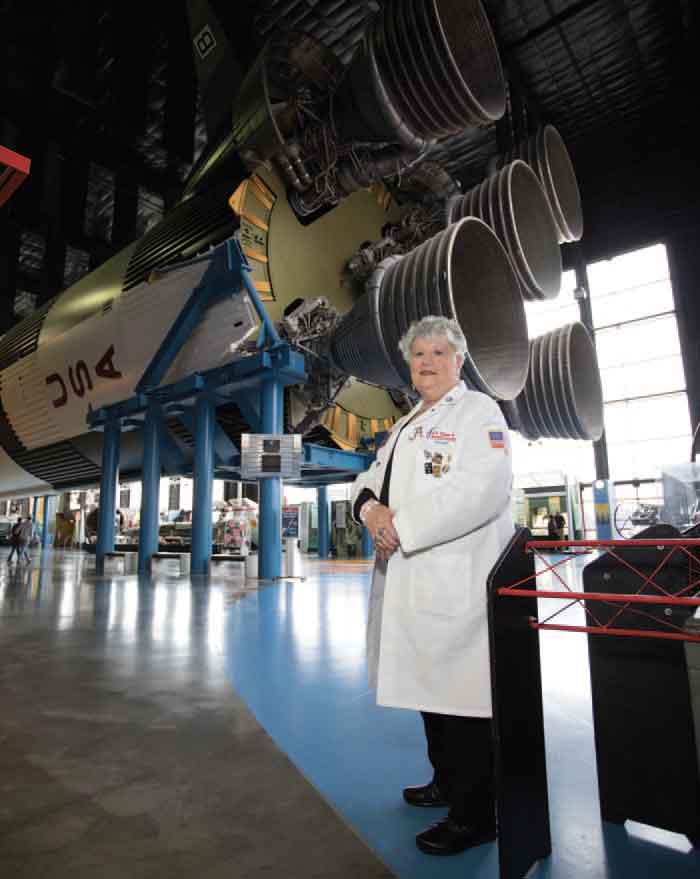 BJ: All told, I have served as Volunteer Promoter of five Ultimate Elvis Tribute Artists Concerts. I did everything from organizing entire events to coordinating logistics regarding the entertainers, airfare, lodging, food, media coverage, and interviews. Proceeds from all five concerts benefited several 501(c)(3) organizations in the Rocket City.

One Elvis Tribute event that I organized was bringing two of the World’s Best Ultimate Elvis Tribute Artists and special backup singers and entertainers to Huntsville for the 40th Anniversary Reenactment Concert, celebrating when Elvis Presley came to Huntsville to perform in 1975. Huntsville is the only city Elvis ever performed five back-to-back, sold-out concert performances! This Reenactment Concert was a major fundraiser for the Huntsville Madison County Veteran’s Memorial Foundation and was a huge success.

But I was unable to participate in the Ultimate Elvis Tribute Artists Concerts event in 2019 because I broke both of my feet in August – in Memphis of all places! Thank the Lord I am back on my feet again. As Willie Nelson would sing: I’m back on the road again!

I’m proud of all three of them, but I’m most proud that they’re young men who understand that it’s important to give more than you take; that they appreciate the value of the educations that they’ve all three worked hard and obtained scholarships for.