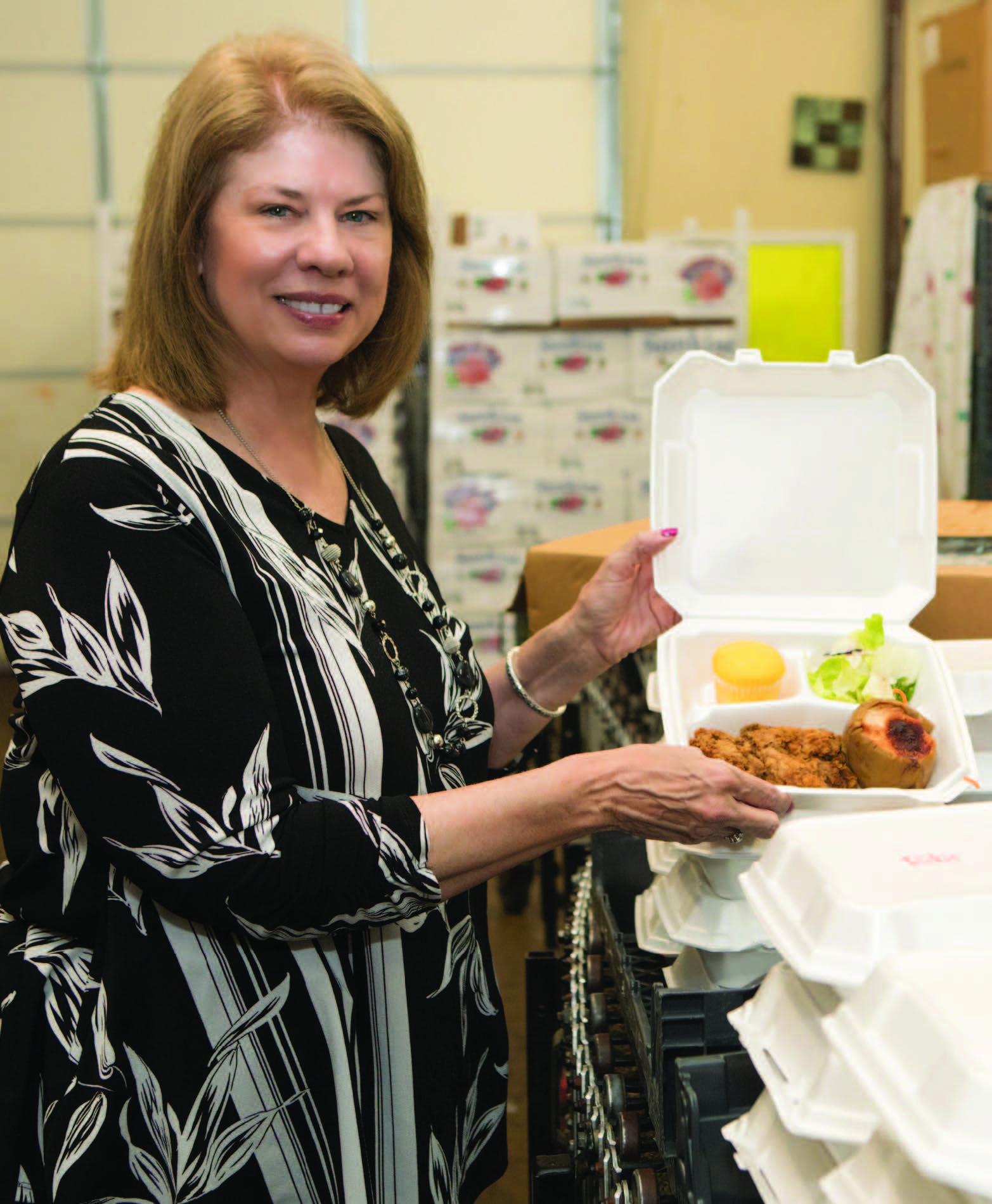 The Deep South heat and humidity are brutal in north Alabama; the rain offers no relief. In fact, it creates a sticky steamy sense of the unbearable. The afternoon’s pop-up torrential downpour hit fast and hard. Despite the weather, there’s always a line at the door. 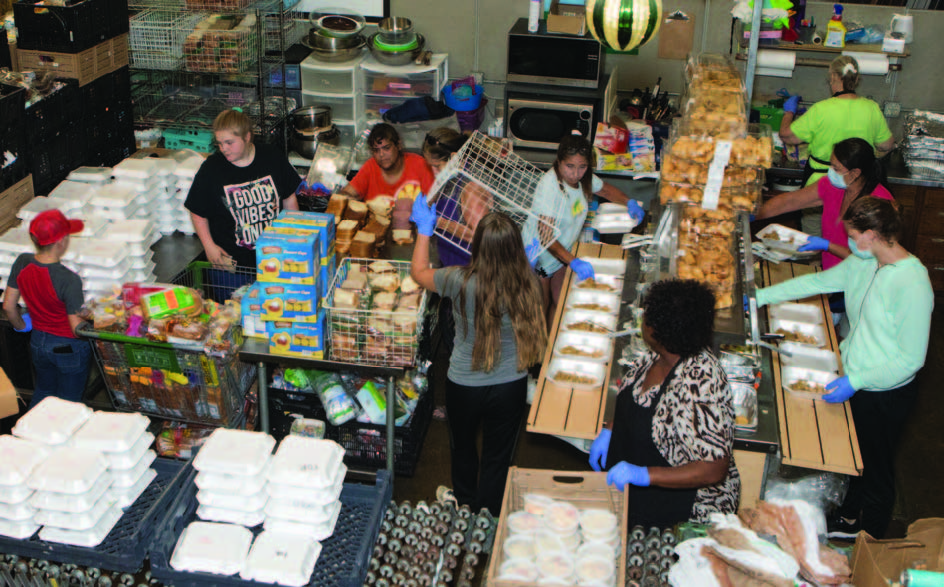 On any given Monday, Wednesday or Thursday, the line begins to form early, sometimes as early as 10 a.m., even though the doors don’t officially open until 3:00 p.m. during the week and at 11:30 on Saturdays. In addition to being hungry, some also have physical limitations, making it hard to stand for long periods of time. A few years ago, some kind souls donated the funds for an awning to combat the weather and benches to relieve the fatigue.

Fran Fluhler, Manna House’s director begins each shift with a group huddle. Communication is key. Nobody is left out of the information loop. Fluhler reminds everyone to be pleasant to the incoming line of people, to put them at ease. “No matter what our feet feel like, our faces need to smile,” said Fluhler.

The meeting concludes with group prayer. Then, it’s time to start preparing the serving lines. There are at least 50 volunteers at the facility – all doing their part; preparing the hot meals, packing kid’s meals, and lining up to help pass out the vast assortment of produce and meats. Along with the large group of volunteers working to prepare for the day’s arrivals, many more are already on the road delivering meals to those who are limited by illness or COVID-19 concerns. 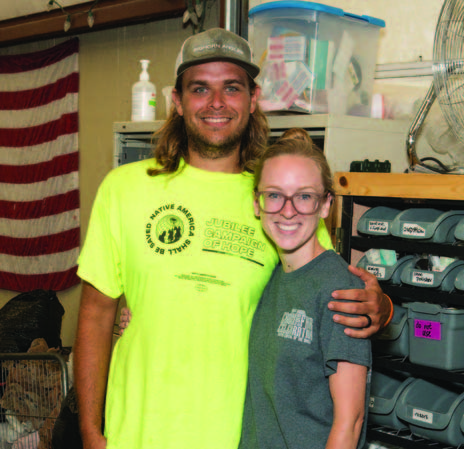 As an enthusiastic force of nature, Fluhler quickly moves from one area to the next, providing instructions to the volunteers while simultaneously giving a brief tour of the over-stacked and over-stuffed facilities.

For the past sixteen years, Manna House has met the challenges of feeding the hungry of Huntsville and Madison County.

Despite Huntsville’s long-standing reputation as the Rocket City, home of a highly educated, highly compensated high-tech population, there exists a large pocket of poverty, almost hidden just below the surface of affluence. Along with poverty comes food insecurity, where grownups and children alike may miss meals due to a lack of food or the means to acquire that food.

COVID-19 only served to increase the number of people lining up each day. Along with many in the hospitality and service industries, there were school-aged children also in need of food. For many, the school lunch program is their one guaranteed meal of the day. With the school closures, Manna House provided 4,000 meals to kids in the Huntsville City School system from March to May. These meals were in addition to their ongoing weekend backpack program which partners churches with local area elementary schools in need. The backpack program provides between 300-400 meals to kids per school.

The group of volunteers are a broad mix of age, race, gender, 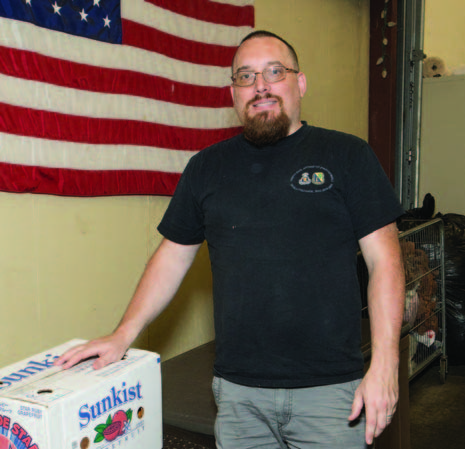 education, and background. Everyone works together as a team to keep the lines moving and to make sure everyone has enough food.

Seth Penn and his wife Kelsey have been volunteering since March. “We do a lot of mission work,” said Penn. “When the pandemic hit, travel was out of the question.” Over the past few months, the Penns have made a lot of new friends. “My favorite is the relationships,” said Penn. “Some don’t have family; we are their family. Being able to communicate and to be able to relate, we are literally giving people hope.”

For Garrett Chapin, a disabled Army veteran and Manna House volunteer, it’s about helping people with nowhere else to go. “We get to be their light,” said Chapin.

Fluhler will always credit the volunteers first and foremost, “They are the heart, soul and sweat equity of what keeps Manna House running. Without them, there would not be a Manna House.” However, the empathy, energy, and enthusiasm Fluhler possesses is the driving force and inspiration for the highly motivated, effective volunteer squad.