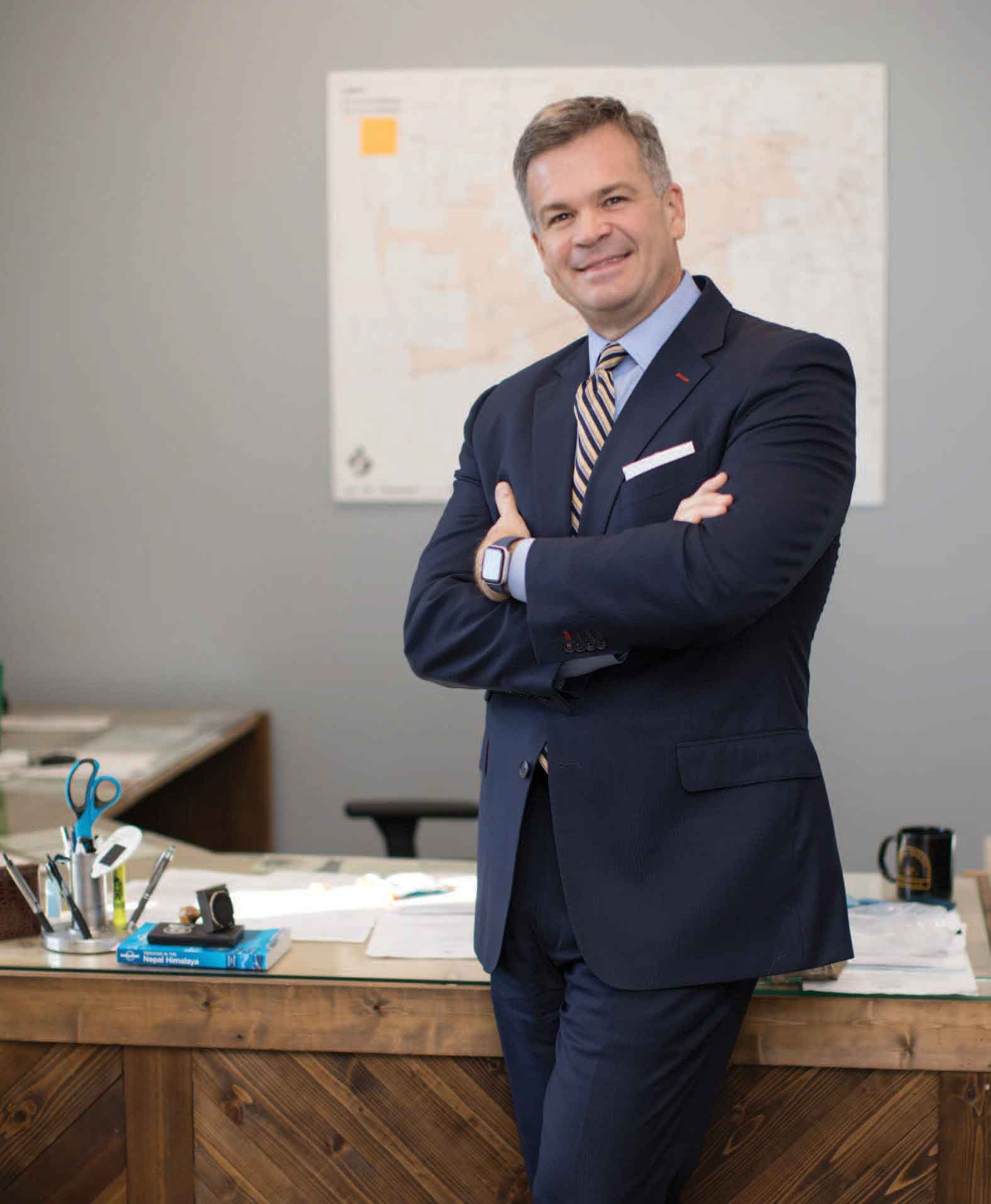 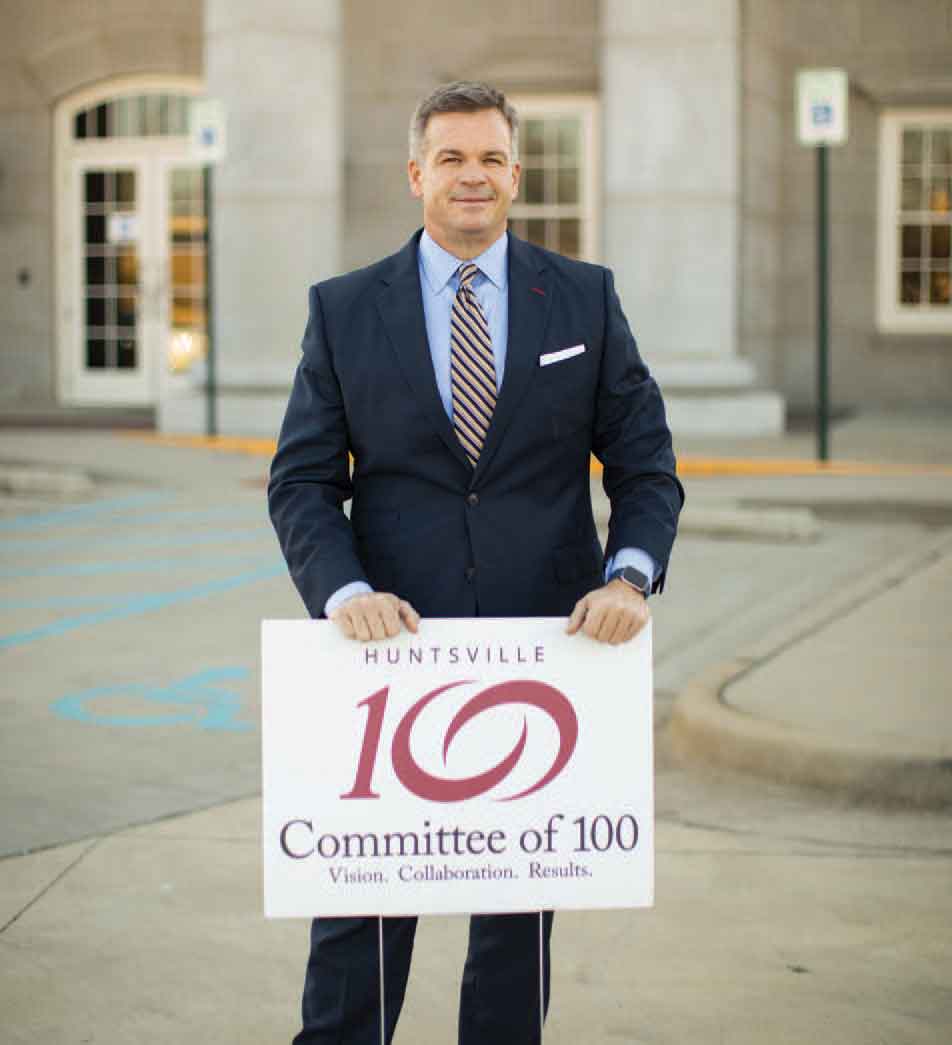 John Allen, the Committee of 100’s dynamic CEO, speaks about its mission and exciting initiatives. Founded in 1995 by a group of eight business leaders from the Chamber of Commerce, the Committee’s focus is the City of Huntsville, the City of Madison, and the County of Madison. It was founded on three principles: high quality public education, long term economic development, and cooperative local government.

EVENT: Tell me about your background and career as a licensed professional engineer.

JA: I grew up in northeast Huntsville, went to Auburn and graduated with a degree in Mechanical Engineering in 1994. I worked at a chemical plant in Decatur as a Plant Engineer for five years, and then I worked for a small engineering company in Decatur doing plant engineering work, traveling around Alabama doing consulting. I started my own construction company that did mostly high-end home remodeling, but I left that behind when I started my role as CEO of the Committee of 100.

EVENT: How did you first become involved with the Committee of 100?

JA: I became interested in local politics in 1997-1998 and wanted to engage and make a difference in them. In 2002, when I was living in Madison, I became more involved. Then a group of my friends wanted to start an organization in Madison similar to the Committee of 100. We wanted to emulate what was happening in Huntsville, so we approached Carol Madry Bell [then the current CEO] and the Committee of 100 asked us to join.

EVENT: How does the Committee of 100 engage with local politics?

JA: We engage with 32 local races including those for mayor, city council, and the Board of Education through our BizPac committee, which includes a diverse group of our members including several from our Young Professionals group. We interview each candidate and make recommendations as to which one we want to endorse. We also help our local leaders collaborate with each other. We do not get involved in state or federal officials’ races.

EVENT: What other initiatives has the Committee of 100 been focused on?

JA: Launch 2035 is one. It is a business organization that we formed in 2015 to develop a 20-year regional visioning effort, focusing on land use planning first of all. The Singing River trail, a long-distance walk, hike, bike trail, came out of this. We envision the trail to eventually go out to Scottsboro and over to northwest Alabama. We see it connecting to regional communities in an exciting, massive way.

Another new initiative is called Raise Your Hand. Our community boasts that we’ve got the highest number of engineers per capita or the largest percentage of Ph.D.s in the nation, but we want to get to the highest concentration of National Board Certified Teachers. We want to add 500 new NBCTs to our schools to achieve that goal. There are over 55,000 kids in the school systems across the cities of Huntsville, Madison and Madison County – and they are the future of our community. Studies have shown that an increase in NBCTs increases student learning. The cost of receiving a certification is expensive so we are raising funds to help teachers achieve that goal.

EVENT: How do you explain your role as CEO?

JA: [Laughs] It is hard to explain my role and what I do here. Sometimes I’m sitting back in my chair thinking of five, ten years down the road and a strategy of how to get there. My day is sometimes like juggling bowling balls, chainsaws, and feathers. You have to treat each situation differently. I am humbled and honored to be sitting in this seat doing what I do. I am interested in all of our 279 members and proud of representing them.

EVENT: It sounds like you and the Committee of 100 are accomplishing great things!

JA: I have a favorite quote that says, “We can do anything not everything.” We are targeted in what we to move our community forward through collaboration and big-picture thinking. You won’t see us on social media, thumping our chests saying how great we are. It’s not: look at us, look at what we are doing! We serve a unique role to the community by having a hyper-local focus. I credit the wisdom of our founders and the mission for that.

EVENT: What kinds of goals have you set for yourself?

JA: One goal was to get physically fit and healthy. I’ve been cross-fitting for 20 months. I just turned 50 years old, and I made a goal for this milestone to do 50k meters (31 miles) on a rowing machine. It took me four hours, four minutes but I did it and have four blisters to prove it! (Holds up the palms of his hands.) I also changed my nutrition, and in May I will be climbing Mount Rainier! My #1 life quote says, “Never assume the luxury of time.” That is a quote that means a lot to me.