It is only fitting that Paulette Risher is the Spotlight subject for the ‘Women in Business’ edition of HUNTSVILLE EVENT Magazine. Not only does the retired Army Major General serve as the CEO of the local nonprofit, Still Serving Veterans, but she has also spent a large portion of her life blazing new trails for women in the military that were previously unheard of.

When Risher was commissioned in October of 1972, women only made up 1.5 percent of all service members. There were no women in the service academies or ROTC, and those women who did serve were usually in the administrative, logistics or medical fields. However, the women’s liberation movement was a strong social force that was bringing in change all over the country. Risher, after graduating from Arizona State University with a BS in Marketing, was given an opportunity to be part of that change at Fort McClellan in Anniston.

“Women officers did not go to branch basic schools, but rather spent their entire careers as WACS – members of the Women Army Corps,” Risher explains. “They, and their enlisted counterparts, had separate command structures including promotion boards, assignment designations and personnel policies. There was the Army and then there was the Women Army Corps. I and my class, members of what was called Women Officers Orientation Course were the first group of women to attend branch basic courses. All branches except infantry, armor and field artillery were open. This was a radical change and not everyone was thrilled. There were a lot of detractors and not all of them men.” 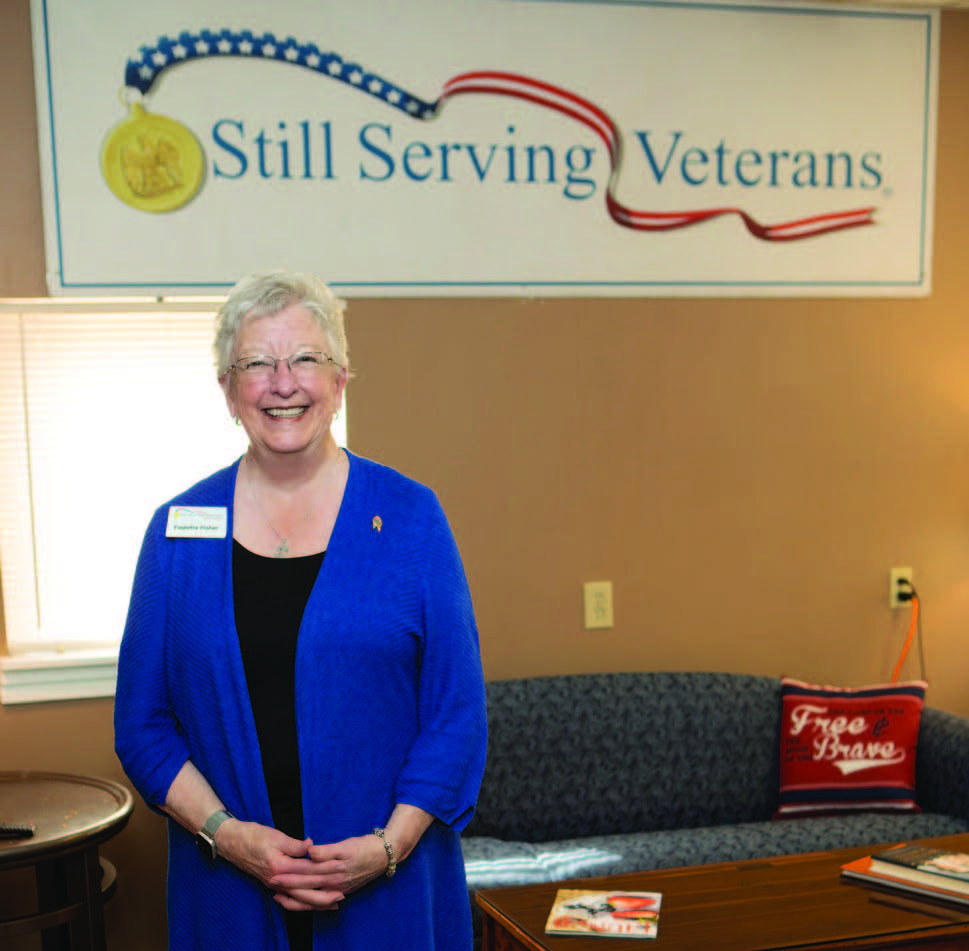 same opportunities after them. And while it might have been challenging at times, it was also exciting because they knew what they were doing would make a difference in the Army and other services long into the future. Women now make up 16.5 percent of the military and are filling positions that were once inconceivable a generation ago.

Risher spent nine years on active duty during this time, meeting her husband Ed in the process on the rifle range. They dated for six weeks before Paulette, again straying from societal norms, asked Ed to marry her. She was married to the Vietnam War veteran for 33 years before his passing in 2010.

veterans to better their lives with the local nonprofit, Still Serving Veterans (SSV). She has been with SSV for eight years, the first five as programs officer and the last three as CEO.

When asked what attracted her to SSV, Risher emphasized the local impact it has and how SSV has been able to be flexible when determining the most effective way to help those who come to the group.

Risher explained that SSV has three main missions. The first mission is career and transition assistance. “We help 1,050 veterans find jobs in the last year alone,” she revealed. “The average pay of those jobs was around $60,000 annually, so these are really good jobs too.” They also provide assistance with VA benefit claims which can be confusing to older veterans. The group helped secure $3.3 million in claims for their clients last year. The third mission is called veteran resource connection. “We are tightly connected with other veterans service providers in this area and beyond,” Risher informed. “If someone is homeless or struggling to pay bills, we might not be able to give them assistance directly but we know who in town

has the capabilities to. So we provide a center to help veterans who are struggling with basic life needs seek out the assistance they need.”

When talking about her work with SSV and her passion for it, Risher looks back at the different life lessons and values instilled by her parents. “One thing my parents taught my brother and me was a strong work ethic. This wasn’t just work ethic in the sense of working hard to put bread on the table. My mom and dad liked their work. It wasn’t high end or very elegant work but it was work that they took joy and pride in. They would come home at night and talk about the people they helped and it left its mark on us.”

Risher has a hard time speaking for women as a whole. Even though she spent much time in new positions for women during her career, she says she was treated relatively fairly during that time due to her hard work ethic. As she eloquently puts it, “I love this work because it emphasizes the importance of letting people bring their whole selves to work and put their ideas out there and to make mistakes while doing great work.”